They say good writers are good readers, I so I figured I’d start getting into the wild mess that has a nation in its iron grasp: A Game of Thrones 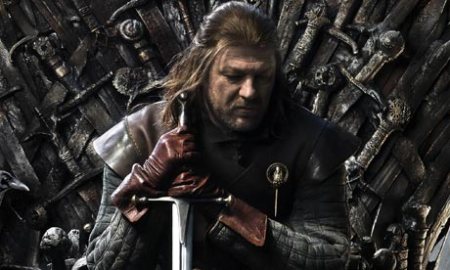 The back cover review establishes the book as being akin to “The Once and Future King,” but I think that, besides subject matter, it’s very different.  I would say it more reminds me of Dune in Middle Earth, just taking the main characters of Dune and shattering them into various other characters in a series of interconnected storylines.

Like Dune, the characters are part of a complex and intricate world whose chief danger, at least for this book, is political (but, given overtones, will soon become mythical).  Like Dune, there is a powerful character who seems poised to reclaim power through uniting nomadic tribes.  While in Dune, Paul rides sandworms, our desert-savior, Dany, may very well have command over dragons.

As I read it, I was consistently picturing Eddard ‘Ned’ Stark as Leto Atreides, and Robert Baratheon (the King) as Vladimir Harkonnen.   I can definitely see the two physical forms being parallel, as well as their attitudes toward power.  However, where Leto is doomed, Ned has many opportunities, and where Vladimir is brilliant and cruel, Robert is vengeful and foolish.  The Bene Gesserit have parallels in Thrones, from court viziers who may or not be wizards to shadow witches in the sea of grass.  And everywhere, everywhere, Martin has politics.  His detail work goes into familial lines and medieval research, on the feuds between families and individuals.  He also a penchant for a bit of sex, which Dune omitted for studies of economies and ecologies.

I would say that where Frank Herbert went for big, big thinking, Martin likes to have a thousand small stories whirring at once, looking at series of personal, sexual, intimate relationships building and bleeding in a fantasy setting.

To give credence to the back cover, his focus on knights, queens, and kings is strongly reminscent of the Arthur fantasies.  He throws in magic, but only in sprinkles and hints in various places, either magic from before the current time or limited to a very secret and select few.  In this way, his books closely resemble the Once and Future King and its predecessor works.  Beyond the niche within fantasy, however, I think that Martin’s work has few similarities to the much lighter OFK.  Martin prefers to deal with coming of age, change in a character, and sexual issues, than with fairy tale comparisons and song-like storylines.  One reviewer described the series as ‘Sopranos in Middle Earth,’ which I can see, but I also more closely tie the first book, at least, to Dune.

I heard an interview the other day with George R.R. Martin where he said that he always wanted to use more characters than producers would like, so he started this project to fully use his cadre of characters.  I would say that theory definitely applies to the Dune comparison: it seems that, for each Dune character, Thrones has seven more.

The cleverness of Thrones is that Martin uses all these stories to make intermingling arcs that allow him to jump (like a cut scene) from one story, place, and viewpoint, to another, entirely different.  He cleverly titles each chapter with the narrator in question.  Martin uses all these various stories to create a world, creating tension by leaving cliffhanger after cliffhanger.

I feel that, for his own writing style, this might have helped Martin go from ‘drive of an idea’ to ‘drive of another idea’ without getting tired.  By the time his creative juices got tired in one chapter, he goes back to one of seven other narrators and viewpoints.

I also like that Martin uses a strong amount of dialogue.  I am a playwright first and foremost, so reading his work made me a bit more hopeful.  You’ll notice in my first chapter that I somewhat skimp on the full conversation, even though I am writing a ‘Tome of Tales.’  Martin uses dialogue liberally and well, allowing him to describe events without them being ‘true.’  His use of third person limited, allows us to see into the minds and opinions of one main character, which works excellently.

I think the character that most fascinated me was Jon Snow, though Tyrion Lannister is a personal favorite – his dialogue is some of the best in the book.  I also thoroughly enjoy Dany’s arc, though at times I find her relegation to her sex a bit much.  However, it really does give her a strong arc, considering where she winds up at the end of the book.

One hard issue to work with when dealing with fantasy is gender relations, chiefly because fantasy settings are generally placed in the medieval ages, when in our history, women had little power.  For all that this kind of world is infused with sexism, the female characters are generally strong.  Cersei is a power hungry and cunning Queen, Arya a willful girl who goes from riches to rags, but in a good way, Sansa spends most of the book in a fairy tale, though she is mature in her manners; Catelyn is decisive (if, at times, emotionally self-indulgent), and other strong women appear throughout the text as well.

One reason this is an issue especially in this text is the rate at which Martin works in sexual intimacy.  Whores abound, bodies are explored and described, and while none of this is sexist per se, the world context is such that women really are things (by law) and the male gaze comes to the fore when dealing with them in almost any context.  It is good that Martin does not shy away from these probable truths of the time, but I wonder that he does not somewhat allow his reader to revel in them as well.

I suppose my complaint is not with Martin, but with the knightly niche.  If it’s  a fantasy world, must it be a man’s world, even if we are placing it in a medieval setting?  Given that its a fictional land, why do so many books adhere to a non-fictional history?  Not an issue for Martin to resolve, just an observation on the genre.

Overall, I greatly enjoyed A Game of Thrones, and I look forward to the rest of this Song of Ice and Fire.  I burned through the first book, each of the intricate storylines compelling me onward.  I recommend it for anyone who wants to know what all the hype is about.  Solid storytelling, brilliantly crafted world.  Gallantry and swordplay with a political edge, marinated in sex, with a garnish of magic for flavor.

3 thoughts on “Book Review: Game of Thrones is like Dune in Middle Earth”