In preparation for The Immortal Jellyfish at the Capital Fringe, The Jellyfish alphabet continues! 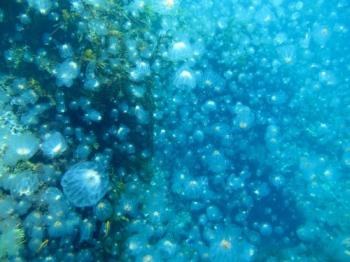 A flock of seagulls.  A bunch of bananas.  A parliament of rooks.

Groups of animals have curious names.  Some make a pack, some a pride, but Jellyfish bloom.   Like a cherry blossom festival, but with carnivorous, occasionally immortal, hydrozoans.

While a flock or a bunch might contain some tens of members, jellyfish blooms number in the thousands and millions.

To be fair, jellyfish are much smaller than other species, and blooms form only on a seasonal basis.

As discussed in the Anatomy post, jellyfish are more stomach than brain.  Some contend that jellyfish lack the sentience to intentional cluster into groups, so the size of blooms depends on water temperature, salinity of water, and ocean currents.   Because jellyfish are more adaptable to salinity and temperature than many of their competitors and predators, the sizes of their blooms may only grow larger, season by season.

For more on The Immortal Jellyfish premiering as part of the FallFRINGE, check out our show page!